If you’re a paintball enthusiast, you’ve probably already heard about the Empire Invert Mini. It’s a top marker that has quickly become one of the most popular pieces of equipment available. Although it has its flaws, it could be said it manages to justify its reputation. But we’ll let you decide for yourself! What follows is an in-depth review that should get you familiar with both its pros and cons! 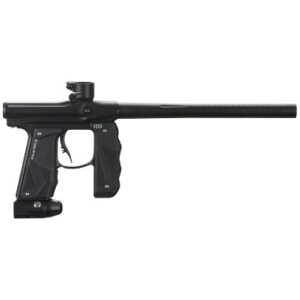 One of the best things about the Invert Mini is its size. It weighs only 1.9 pounds, which ranks it among the lightest markers. The experience of holding it has by been called unparalleled. This is due to the fact that it’s both quite small and very well designed. It’s different than most other guns since it doesn’t require using hoses. This allows the player to handle it with only one hand. A single button functions as the safety catch and the power button. Thanks to its minimalist design, it boasts a very sleek look that usually makes players envy this paintball gun even more. Although, It does have one downside; It seems as thought this paintball gun is not very easy to handle if you’re a person with big hands. Furthermore, this is mostly due to the fact that not enough space has been left between the grips.

Even though this is a small paintball gun, don’t let its size fool you! The Invert Mini is a marker that can easily compete with other more robust-looking guns. When it comes to performance, it boasts both speed and accuracy.

Since it’s electronic, the marker is automatically faster than many similar guns. But it’s also a lot faster than what you’d expect from such a small piece of gear. It has been estimated that its firing rate is 15 balls per second. That’s pretty impressive in itself, but the number can go even higher. The maximum is 20 bps, which makes it extra fast and efficient in battle.

When it comes to accuracy, the Invert Mini is just as good as any other high-quality marker. Its effective range is 150 feet. This means that it can hit targets that are that far from the player handling it. Squeezing the trigger results in some vibrations, but that’s not something players don’t expect. What could come as a surprise is the loosening of screws that sometimes occurs. It could be said that this is one of the marker’s main disadvantages.

The Invert Mini has plenty of different features that will keep you occupied. But don’t take our word for it – check out the list!

Being able to control the trigger is one of the most important things when handling a gun. This is why the Invert Mini is equipped with one that allows for adjustment.

This is a piece of equipment that makes sure you don’t start chopping your own paintballs. Markers that don’t have it can’t detect whether they’ve been loaded or not. And pulling the trigger of an unloaded gun results in destroyed balls. The Invert Mini, on the other hand, simply refuses to fire once you’ve emptied it.

The Invert Mini has a couple of different modes you can use during battle. They are the PSP, NXL, NPPL and Millenium. Each has its own pros and cons. What’s more important, though, is the fact that being able to use them all gives you a lot more options.

Markers that are at once light and accurate are hard to find. And when they’re durable as well, you better hold on to them! The Invert Mini is definitely among them. This marker is made of high-quality materials that make it possible to enjoy such smooth player experience. It also means that you don’t need to handle it as if it’s going to break any minute. But that’s not all!

The Invert Mini comes with a limited lifetime warranty. This warranty is provided by its manufacturer, that is, the Empire Paintball company. This basically means that you’ll get any broken or damaged part fixed by the manufacturer itself, for as long as you have it.

There are things that need to be considered before investing in a quality marker. One of the most important ones is its potential for upgrades. It’s basically a question of whether the gun can be customized to suit your preferences.

It seems that this is one of the few disadvantages the Invert Mini has. It doesn’t mean that it can’t be customized at all. You’ll find it very easy to add certain barrels, triggers, feednecks and similar pieces of equipment. But you won’t be able to do much more than that.

This doesn’t mean, however, that the Invert Mini is not the right choice for you. The potential for customization is not equally important to all players. So you’ll need to decide for yourself how big of a disadvantage this really is.

Since the Invert Mini is a very popular marker, plenty of players have already reviewed it. Most like it, especially for its design, speed, accuracy and durability. But there have been some complaints as well. What follows is a summary of those reviews in the form of a list of pros and cons.

All things considered, the Invert Mini is a solid marker, to say the least. It provides the player with both accuracy and speed. In terms of player experience, it’s one of the best pieces of equipment available. Thanks to a bunch of different features, it’ll keep you occupied for some time, especially if you’re a beginner. It has some annoying vibrations and it isn’t that customizable, but it’s popular with good reason! Thank you for reading my review of the invert mini paintball gun review and I hope it has helped you in making a clear decision!