Planet Eclipse is a very well know brand by seasoned paintball players and this is because of the extremely high quality of their paintball guns. However, since this is such a good paintball gun I wanted to review it in further depth.

As one can see, the Planet Eclipse ETEK 5 has a very interesting and slick design. In fact, some may mix this marker up with the amazing EGO LV1 due to their extremely similar design. Due to this markers extended pinch between the fore grip and the grip frame this marker will feel extremely comfortable and stable while firing. Furthermore, some may notice that the barrel of this paintball gun looks like it has two pieces, that is because it does! This gun is equipped with a 14.5″ two piece barrel which will allow you to customize the barrel. Continuing, you will be able to change the bore sizes, tips, colors and more!

This system is very advanced. Essentially, what this will do is make the striking bolt take longer swings before it fires the paintball. This way when it fires the paintball it hits the ball very softly. Moreover, this will allow you to shoot even the most fragile paintballs without having to worry about bursting balls. Furthermore, when it does strike it will be very quiet making it hard for people to know your location. Now I know what your thinking, a longer swing means less balls/sec. Wrong! this paintball gun can still shoot up into the 20 balls/sec range.

Having an internal LPR chamber will allow for lower LPR pressure and more consistent velocity shots. Every time you shoot this paintball gun, you will know that its going to shoot just like the last shot. 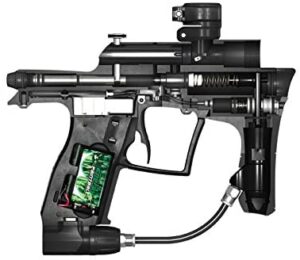 This is one of the best regulators for paintball guns. What this regulator will do is ensure that every time you shoot this gun that the correct amount of pressure is behind each and every paintball.

Infra red sensors will insure that you never chop a ball! nobody wants to deal with a chopped ball in a very nice paintball gun!

This interface will work together with your microprocessor to provide you one of the best experiences! Your gun will tell you exactly how it feels so you will know when something is wrong.

You can think of this as your paintball guns brain. This interface can take in up to a million instructions per second! Basically, this gun is a multitasking powerhouse that will not malfunction on you.

With this amazing paintball gun you can choose between ramping or going semi automatic. Furthermore, it has a magnetic trigger return which will shock you how many balls you will be able to shoot per second!

I could keep going but I would be here all day. The last thing that you need to know is that this paintball gun is compliant with regulations of ALL Major Paintball Leagues. If you would like to view even more specs, click below.